Martial Arts are good for your child. There. We said it.

We usually think of the martial arts as this thing that teaches us to fight. But it turns out that it’s not about fighting. Not even a little bit. Martial arts is about developing the whole person. It impacts every aspect of life, from physical agility to mental awareness to organizational skills.

Robinson Martial Arts is run by a dynamic group of people who believe in the power of education. In fact two of us (Scot and me, Autumn), are licensed teachers with Master’s degrees in education. We are passionate about how learning can transform lives, and that participation in martial arts can be the key that unlocks learning for lots of kids – especially those who don’t believe that they can.

Read on to be convinced.

The mistake that most people make is thinking that learning happens in a classroom. That’s just not how it goes. Learning is a whole life experience, and stepping onto the mats in the dojo offers your child a foundation for learning that’s not part of the school environment. Learning something outside of the classroom helps your child to feel confident that they can learn inside the classroom.

Somewhere along the line, teachers just started expecting kids to know how to learn. We expect them to magically understand how to take in knowledge. But for many kids, that’s not a skill that comes easily. Martial arts teaches kids to focus and concentrate through kinetic (body) learning and reinforcement. While concentrating on a math problem can be daunting for some kids, those same students can learn to break down the parts of a front kick because they’re using their body. That skill transfers – so once a child learns focus on concentration through body movement, they can then use those same concentration skills in math class. Not to mention the particular concentration and focus skill building that is part of the martial arts curriculum.

When we walk into the dojo we walk in with the expectation that we will be transformed. And for anyone who sticks around for long enough, that transformation is real. Kids become accustomed to the expectations that are set for them. The reputation of a struggling student follows them across the years of their education, and so teachers have a level that they expect each student to be able to reach. What martial arts does is to wipe that slate clean. The instructors in the dojo believe in the power of every student to be successful. Everyone has the potential to be transformed from a white belt into a black belt.

School is stressful. Period. With high stakes testing from elementary school and a constant pressure to get good grades. What martial arts teaches is how to handle life when it gets stressful – because a fight is a hugely stressful things. Sparring (when two opponents fight in a class or tournament setting) offers kids the chance to deal with stress in a controlled but very real way. They’re having to make split second decisions that will be the difference between getting hit and hitting their opponent. Adrenaline pumps during a sparring match, and the sensations are just about as real as they get. But here your child has their Sensei there to guide them as to how to deal with that stress, which generally involves meeting it head on. This skill transfers to school, where your child now knows how to manage that stress and to do what they have to do anyway.

5. Martial Arts Improves Self Worth

A child who struggles in school struggles with their self worth. Martial arts helps kids to set small, attainable goals and then gives them real rewards for those. This is not “everybody gets a trophy,” but it is recognizing accomplishment and then building on that. The move from white belt to yellow belt is second only to the move from brown belt to black belt. It’s a big deal. And it keeps on being a big deal with every progression, every test passed and every certificate signed. That builds self worth in a child who has not been rewarded in the classroom, and once your child feels like they can do it, then they’re stronger and able to attack those classroom goals!

The bottom line here is that this isn’t something that we’re making up. We’ve seen it in action. So many of our students come in on day one with parents who are frustrated with their grades and their attitude about school, and then after six months of working in the dojo they’re showing improvement and looking forward to going to class! We’ve seen some dramatic transformations, and we’re excited to see more.

Still not sure? Talk to some of our parents! They’re always happy to share their experiences. 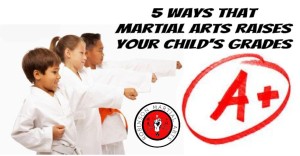